The Case of The Absentee Facility Owner

“In the last issue, I recounted a story about one of the rare occasions on which my small private locating company had been called to look at a damaged facility after having marked a site for private facilities. Having struck an unmarked electric line, the excavator (who had paid approximately $150 for his locate four weeks before damaging the line) was furious. “Did you know locators don’t locate?!” he raged to a small group of onlookers. “Because I didn’t know that. I thought when you called a locator, you got locates!”

The line he’d struck offered no topside evidence of its presence (at least not for a few hundred feet outside of his requested dig area) and may or may not have made itself known by passive techniques or by an active search. The fact of the matter was that when my technician had visited the site, the contractor had only been interested in the location of a nearby water line. His show of beleaguered anger was as much about allocating blame away from his company as anything else. His argument was simple: “Hey, I paid for a private locate. This line is private. They didn’t find it. It’s their fault.”

Superficially, that might appear true, and it may be tempting to start thinking of things the locating technician could have done to find the unknown line. It might also be tempting (it sure was for me) to look at ways the excavator might have done more to prevent the damage. But the truth is, a third party – a party largely absent from the discussion until the lights went out in their gym – had an equal, if not larger, share of the blame.

As we stood around staring at the damaged cables in an open hole waiting for repairs to commence, a custodian for the school district (the owner of the damaged line) said, “Every time something gets hit, they say they’re going to make a map, but they never do.” He then went on to complain that the staff member who knew where everything ran had retired a couple years before, leaving an information vacuum in his wake, an information vacuum that a comprehensive site survey would have addressed. 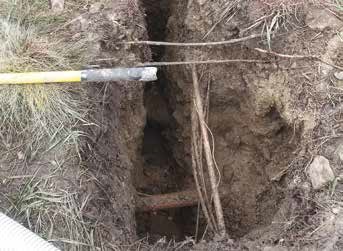 This is not uncommon. Many private facility owners are completely derelict in the maintenance and management of their underground plant. Time and again, when I show up on a job site as a private locator – scheduled for a very short period of time and held to a modest fee – and ask for information about what private facilities might be buried, I’m greeted with the same half-joking answer, “That’s why you’re here.”

It’s almost 2020. Significant coordinated damage prevention efforts have been going on for at least four decades. We’re too far along for this. It’s time for large private facility owners to wake up and get in the game.

And in case you’re wondering, the school district ended up paying for that one.

Christopher Koch is the author of “Welcome to Metropolis: Riding Solo into the Heart of America,” now available on Amazon and Audible. He is also a training consultant and President of ZoneOne Locating. Christopher is past president of Nulca and worked on both the 2009 and 2015 revisions to the Nulca Professional Competency Standard. He can be reached by email at Christopherkoch@live.com or on Twitter @kochauthor.

PrevPreviousAugmented Reality (AR) Can Improve Communications Around 811 Transactions
NextThe Global Utility Locator Market Size Is Expected to Reach $7.8 Billion by 2024, Rising at a Market Growth of 5.5% CAGR During the Forecast PeriodNext