Safety First: Staying Out Of Harm’s Way While Working In Traffic Many jobs require a person to work in the roadway or on the roadside. According to OSHA statistics, 40% of roadway construction fatalities were caused by workers struck by moving vehicles and equipment. During my years of line locating, I have painted many miles of line buried beneath the road. Unlike the movie character Austin Powers, “Danger” should not be your middle name when working next to, or in the middle of, the road. I speak from personal experience when I say there is literally danger around every corner when marking lines buried beneath busy roadways.

I was once hit in the neck with a rock that was propelled by a tire when a car passed me by. In that instance, I was in the wrong place at the wrong time. I have also been hit in the side of my face by a cup of soda thrown by a passenger of a random car driving by. I’m sure that guy thought it was funny, but I came to realize a new level of stupid that day. I have never been hit by a car, but have had several close calls. Luck has played a big part in my survival, but I like to give credit to the skills I developed playing dodge ball, which is a long lost sport. In dodgeball, you keep your eye on the ball and dodge, dip, dash when you need to avoid getting hit by the ball.

A few of my near misses were my own fault. My closest was when focusing on the task at hand, I was distracted by the readings of my line locating equipment and stepped into a lane of traffic. Luckily, the driver saw me and swerved to miss. I was so close that the side mirror of the car passed between the screen on my locating equipment and my eyes. In this case, I took my eye off the dodgeball. I had several other close calls where drivers where distracted or in a hurry.

During a training event a few years ago, a water line locator in the class told us all a bone-chilling survival story. He had been hit in the back by a small SUV and became wedged beneath the vehicle. In a moment of panic, the driver drug him for a little over 150 feet while slowing down and speeding up twice in attempts to shake him from beneath her vehicle before finally coming to a stop. He survived and recovered, and returned to line locating with a new perspective on safety in traffic.

In the survival story above, the locator told us he made the mistake of using only three cones placed beside and behind his truck to merge traffic to the middle lane so he could mark his water line in the outside lane. He was ahead of the cones marking the lines. After the SUV passed his truck and cones, the driver merged back into the outside line and hit the locator.

Make Yourself as Visible as Possible

Use your PPE to make yourself visible. Use your traffic cones, flashers, beacon lights and whatever else you have available to safely merge traffic around your work area when locating along the road.

Pick the best time of day to mark lines in traffic. When you read your tickets in the morning, determine which jobs will require road marking and route those jobs for a good time of day. It has been my experience that during a normal workday, traffic is considerably lighter between the hours of 9 a.m. to 11 a.m. and from 1:30 to 2:30 p.m. If you have a jobs that involves marking on a busy road, try to schedule it between those hours. Don’t take unnecessary risks. In heavy traffic, it may be best to call for assistance to get a person onsite as your traffic spotter to cover your back.

During your visual site inspection, view your work area like a playing field. Look sideline to sideline and goal line to goal line to determine your traffic control needs. Consider any special access to manholes and valves that may need to be opened for access to connection points to the utility. 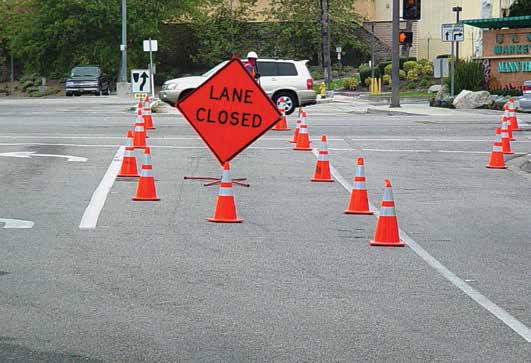 “…After the SUV passed his truck and cones, the driver merged back into the outside line and hit the locator”

Keep your Eye on the Ball

Years ago when marking the road, we mainly worried about drivers just not seeing us. In today’s world, we have so many drivers distracted by their cell phones. Drivers not only talking on the phones but those who also post selfies, send or read texts and emails, or even watch a movie while cruising down the road. Plan your locate so you can walk towards traffic when marking lines in the road, keeping you facing the oncoming traffic. Just like the game, you want to keep your eyes on the oncoming dodgeball. You may also want to consider using a paint stick that will allow you to remain upright when tracing and marking lines in the road. If you’re forced to bend over with a can of paint in your hand to mark the line, you are taking your eyes off the traffic. Some locators call this “spraying and praying”. If you must bend over to paint and turn away from traffic, this is a good time to have a fellow employee onsite to be your traffic spotter and watch your back.

With repetition can come complacency and it takes great self-discipline to make safety your first priority. Don’t wait until you have an accident or a close call occurs before you think safety first. Be safety minded and good luck. Your best safety tools when working in the roadway are your eyes and your brain. Always keep an eye out for crazy drivers and never underestimate the level of stupid that could be behind the wheel.

Bob Nighswonger is President of Utility Training Academy. He can be reached at bob@utasearch.com. Excerpted from the 2019 Excavation Safety Guide.

PrevPreviousRules To Dig By, Including Best Practices For Safe Excavation
NextBringing Natural Safety To The Edge With Smart MeteringNext

2 thoughts on “Safety First: Staying Out Of Harm’s Way While Working In Traffic”