In 2016, WSP Canada developed a Master Water Servicing Study for the District of West Vancouver aimed at providing a comprehensive infrastructure upgrades plan to improve the ability of the District’s water system to meet adequate levels of service requirements for its residents. Key to this project was the Watermain Criticality and Risk Assessment, the goal of which was to develop a risk-based approach for the prioritization of watermain renewals.

The distribution system consists of more than 325 km of watermain up to 900 mm in diameter, with the oldest sections of the network installed in 1911, and significant portions of the network comprising of Cast Iron and Ductile Iron pipes. The current replacement value of the watermains is $246 million.

Aging water mains are subject to more frequent breaks and other failures that can threaten public health and safety (such as compromising water quality and fire-fighting flows). Buried infrastructure failures also may impose significant damages, are costly to repair, disrupt businesses and residential communities, and waste precious water resources.

The reinvestment challenge is significant, and it is critical that limited funds are invested optimally to extract maximum value (life) from the assets at the best balance between lifecycle cost and risks to the service. Getting it wrong will add to the scale of the financial challenge faced in the years to come and increase the likelihood of reduced service standards.

The objective of the risk model is to support the District to make informed management decisions about replacement programming and help the utility to focus resources and efforts on critical watermains. The model achieves this by standardizing assessments and decision criteria for watermains around a framework of evaluating risk relative to corporate priorities.

Advanced predictive models for optimizing lifecycle costs across multiple asset portfolios aren’t developed overnight. The strategies for utility reinvestment planning should be tailored to each utility. The level of decision-making sophistication will largely depend on the available dataset and the institutional history of asset management practices within each utility. Many utilities exercise at minimum a basic reactive approach to re-investment planning, such as following a “first in, first served” approach or a “worst first” method.

The risk model was built around a framework of evaluating the various types of impacts and consequences that a break or loss of service in a watermain might have on the District in terms of social, economic or environmental concerns.

Table 1 illustrates some examples of criticality and consequence indicators developed for each “Community Outcome,” along with an example measurable parameter.

The likelihood of failure is driven by remaining useful life and changes in condition over time, requiring predictive capability in the model. Remaining useful life is the expected total useful life for the asset (an average assessment based on known performance characteristics and historic asset life/survival data) less its age. This estimate was then adjusted up or down based on known performance information such as operating environment, condition, maintenance history or leakage.

Having determined that the District’s watermain network was in relatively good health, the next question to ask was how the network’s risk profile would change over a 20-year planning horizon given different approaches to reinvestment funding. To this end, the risk model was used to forecast changes of failure probability for each watermain using an age-based approach in which each incremental time-step reduced the remaining useful life of each asset by one year. For the “what-if” scenarios considered, two approaches to renewal funding were explored with District staff: 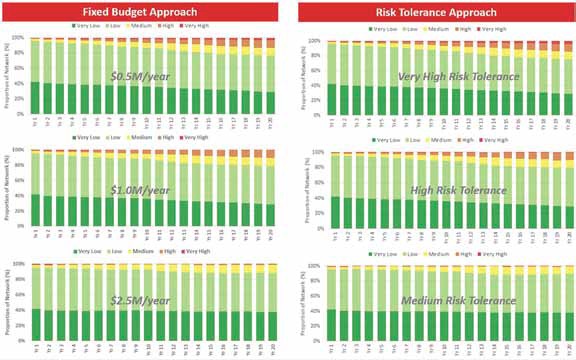 Table 2 shows the results of six analysis scenarios, three for each approach described above. Starting at the top left with a fixed budget of $0.5 million annually, it’s clear that the lower budget would lead to a gradual deterioration of the network, with over 10% of watermains classified as High to Very High Risk at the end of the 20-year program.

Looking to the immediate right at the Very High- Risk Tolerance results, a similar network deterioration trend is evident, showing how setting a fixed budget too low is akin to setting risk tolerance too high. Going down through the results, as annual fixed budgets are increased and risk tolerance levels lowered, the overall risk profile of the watermain network sees more gradual deterioration.

Due to the good current condition of the network, there appeared to be some capacity for the network to deteriorate and still remain within the risk intervention levels selected for this analysis. Ultimately, a minimum annual reinvestment level of $1.75 million was recommended to the District (this did not include capital upgrade requirements for existing system deficiencies, source redundancies, and future needs). This approach allowed for funding critical short-term capital projects identified in the Master Water Servicing Study while maintaining a healthy watermain network. While some deterioration of the network could be accommodated within the study period, it was noted that the long-term management (beyond 20 years) of the utility will have to consider increased reinvestment requirements in the future to meet the $3 million average needed to continue to manage watermain risks at the current level.

Michael Levin, EIT, is an Infrastructure Planning Engineer with WSP in Canada. He has four years of experience in municipal infrastructure planning and hydraulic modelling for rural and urban communities. He can be reached at Michael.Levin@opusinternational.ca.