Excavation damage – incidents occurring when digging equipment strikes an underground gas line or other infrastructure – are a dangerous and costly problem in our industry. The Common Ground Alliance (CGA) estimates that there were more than 91,000 such dig-in incidents in 2016, leading to numerous fatalities and more than $1.5 billion in repair and replacement costs, not to mention likely billions more in lost time and productivity costs. 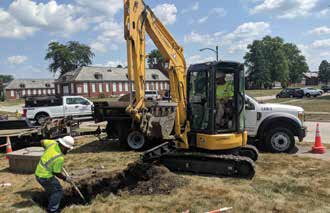 The CGA also points out that the two leading causes of these incidents are failure to call 811 so utilities are notified of the intent to dig and may respond by marking the location of buried infrastructure before digging, and haphazard digging practices despite such markings.

If there is a bright spot in such observations, it is that they suggest these incidents are, in many cases, potentially avoidable. And, as is often the case, the application of innovative technology can help protect against inevitable human error and improve safety and performance outcomes at any job site.

For more than 75 years, GTI has been strategically partnering with members of the natural gas industry to pursue leading-edge research and development efforts that advance practical new technologies with high value for industry stakeholders and consumers. These joint efforts have led to more than 1,300 U.S. patents, as well as 1,250-plus commercialized products and licensing agreements now being used to improve safety, minimize environmental impacts and bolster productivity throughout the natural gas value chain, from supply to delivery to end use.

The concept of helping to alleviate the significant dangers associated with digging in proximity to buried infrastructure by creating an Excavation Encroachment Notification (EEN) system has been in the sights of GTI and its partners for years, and a number of pilot projects have helped advance aspects of an ultimate solution.

Most recently, GTI has been working on a cutting edge EEN project in conjunction with the California Energy Commission, Operations Technology Development (OTD), a member-controlled consortium of gas utilities working together to develop technology solutions for safe and reliable infrastructure operations, and Pacific Gas & Electric Company (PG&E), a California-based utility. The team has developed an Excavation Encroachment Notification system delivering a valuable enhancement to current damage prevention efforts by additionally providing real-time feedback and alerts during digging activity. Using cellular communications links, the system combines the utility’s invaluable infrastructure location data, Global Navigation Satellite System (GNSS) technology for realtime equipment location, and newly-developed sensor data analysis that determines equipment digging within the tolerance zone. The system has been well proven in the field through thousands of hours of use and significantly improved upon through ongoing real-world user feedback and suggestions. The system is now ready for commercial development.

It is often noted that, ultimately, the most valuable digging tool on an excavation site is the phone, the device used to call 811 and bring in resources that mark the location of hidden underground infrastructure so that dangerous and expensive dig-in incidents can be avoided and all other activities can continue moving smoothly. However, what if, despite regulations and best practices, that call is not made, or if the markings themselves (temporary at best) are prematurely erased or obscured, or even overlooked during work processes, rendering them ineffective?

This concern led GTI and its partners to work to build upon the conventional marking system to become a “two-way,” rather than a “one-way” system, with the potential for utilities to essentially provide feedback not once, but on an ongoing basis based on observed activity long after the locate crews have sprayed their line markings and left the area. 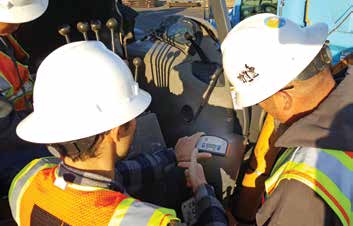 The physical on-site “heart” of the EEN system is what we call the “black box”, a surprisingly small, compact black box that sits in the cab of the excavator, backhoe, tiller or other individual excavating vehicle of nearly any size. The electronics housed within include a cellular modem for sending site information to the back-end analysis portion of the EEN system. It streams data through the standardized WebSocket protocol, providing full-duplex information transfer. This information includes motion data from a strategic combination of nine degrees of freedom onboard sensors, including accelerometer, magnetometer, gyroscope and more that are ultimately used to determine real-time vehicle activity. And, it includes an onboard GNSS that makes use of both the domestic GPS satellite network as well as international satellite systems to enable access to even more accurate and robust spatial location information.

To make it most universally practical for the purpose, and based on user feedback, the box can be plugged into any 12v or 24v power/lighter interface, or even hardwired into the electrical system of nearly any vehicle. Further, it is constructed with a robust protective housing and sensitive electronics within the device are hardened against the challenges of the construction environment, which, for excavations within California during the summer, saw exposures that included direct sun and temperatures well above 120ºF, as well as torrential rains, mud, dirt, dust, grit and more.

The data collected by the box is sent at five-second intervals to an Amazon Web Services computing environment, where the analysis portion of the EEN system is performed. The system continually evaluates the data stream against gas pipeline GIS location information, utilizing such tools as Apache Kafka, Apache Spark and an ArcGIS Server with GeoEvent Server.

Of significant note, the work of GTI and its partners led to the development of proprietary algorithms to characterize the actual activity of the equipment at a given moment based upon the input received from the motion sensors. Characterizing current activity was vital since there is obviously a world of difference between equipment driving harmlessly over buried infrastructure and equipment beginning to dig into that same location; information that clearly cannot be determined by spatial GNSS data alone. This initial work included the machine learning analysis of more than 40 million data points to create an algorithm that can determine by a motion pattern “fingerprint” whether equipment is driving, digging or idling with a high degree of accuracy. Also, two algorithms were created, one for excavating equipment and one for agricultural ripping and tilling equipment, since the motion fingerprint of equipment operating in a small area and making deep cuts looks very different than that of equipment moving in long stretches dragging a shallow cutting instrument behind it. This has become especially important since, due to erosion and other factors, incidents related to agricultural equipment uncovering and “catching” gas lines nearer to the surface are becoming more and more common.

The final component of the solution are the various “feedback” alert mechanisms provided to the stakeholders to optimize situational awareness and ultimate operational safety. Most immediately, the system produces both auditory alerts (beeps loud enough to cut through ambient construction noise and ear protection) and visual alerts (a series of bright LED lights) in levels of urgency appropriate to the level of risk determined. In addition, detailed operations desktop and mobile compatible dashboards are provided to supervisory personnel both in the field and in remote offices and other environments. These dashboards include real-time and historical data for all pieces of equipment on a given site, and can be readily accessed by users.

More than 150 prototype EEN devices have been used in the field by PG&E and a variety of excavators, including construction companies, agriculture users and municipalities. Feedback has been overwhelmingly positive, with users praising the plug and play set-up, convenient mobility, fast response and robustness of the devices, as well as the “bonus” of improving the overall fleet management capabilities and subcontractor visibility through the detailed dashboards provided to supervisory personnel and general contractors. Users also praise the extra degree of communication visibility that “reminds” stakeholders to act and helps ensure a reach out to the utility/811 marking resources in the first place.

Supported by a significant degree of demonstrated industry need and inherent demand, GTI and its partners are currently in negotiations with a number of potential manufacturers to allow widespread dissemination of this valuable, patentpending tool. Indeed, the system was developed with an eye towards creating an economical solution well within reach of the broadest possible user base, including even the smallest contractor. And, the time seems especially ripe for more prevalent use of these kinds of damage prevention tools. The Common Ground Alliance reports that incidents in 2017 have increased 20% over the prior year. Some of this is related to improved reporting methods, suggesting that incidents, while disturbingly common, have nonetheless long been underreported. Other reasons for the sharp increase are related to the trend toward increasing infrastructure work, which, with the direct correlation of the two, suggests a resulting potential increase in dig-in incidents if some significant action is not taken. Hopefully, more widespread implementation of preventative tools such as this Excavation Encroachment Notification system can decisively reverse the trend, saving lives, protecting the environment, reducing service outages and allowing more efficient and productive workflow on every job site.