Safety for the Work, and the Workers

Over the past three decades, Subsurface Utility Mapping (SUM) has gained momentum in the AEC industry as a superior practice for capturing the underground environment. Building on Subsurface Utility Engineering (SUE), SUM goes beyond locating underground utilities; mapping underground data in detailed delivery formats that owners and designers can use to make significant project decisions. The Federal Highway Administration (FHWA) and a number of research studies assert that SUM mitigates risk and aids in keeping projects safe, on budget and on time.

Although SUM already minimizes project risks, there is work to be done in mitigating the risks to people. There is a false assumption that utility locators and land survey professionals are always sufficiently protected in secure, traffic-controlled work zones while mapping for existing condition site surveys. However, many utility locators on public and private projects are exposed to enormous risk, often working without the benefit of traffic controls and left to navigate live traffic lanes.

Mobile mapping has been proven to decrease risk to utility professionals who are performing SUM work. Let’s examine the design, construction, and results of mobile mapping platforms assembled and built by SITECO Of Bologna, Italy; Sensors and Software (SSI) of Toronto; and DGT Associates of Boston.

With this technology, we find that it is possible to survey and map the above- and below-ground environment from the safety of a vehicle, using a mobile system that delivers high value data for preliminary surveys. Saving workers lives, reducing survey costs and delivering more valuable three-dimensional data will soon be a new best practice for highway departments, light rail designers, energy asset owners, and state and local governments. 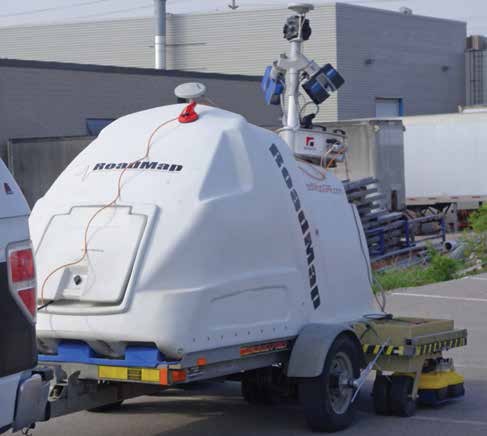 THE NEED FOR BETTER MOBILE MAPPING

As an employer and project executor, safety is a priority. With the expansion of the popularity of SUM work across the nation (and globally), concern has grown for our teams and our colleagues. Some countries have strict laws and regulations for the work of surveying and engineering professionals, but it is common in the United States to see utility locators and survey professionals working in live traffic lanes to capture three-dimensional details used to prepare plans and design documents. According to a report from the FHWA, in 2015, there were 12 work zone crashes in the U.S. each week that led to at least one fatality.

Mobile mapping has been used as a SUE/SUM method for years, but most current solutions still require workers to be exposed to risk while using handheld systems, or to disrupt traffic by traveling with vehicle-compatible systems at slow speeds. To address this, the DGT team collaborated with our partners at SITECO and Sensors & Software (SSI) to advance mobile mapping systems, integrating above- and below-ground remote sensing systems into a single, highway-ready mapping platform.

The SITECO Roadscanner Compact (RS-C) was designed for simultaneous roadway speed data collection using mobile lidar and ground penetrating radar (GPR) with multiple antennas and different frequencies. We wanted the concept to be mountable on a vehicle and able to collect both data sets at posted speed limits up to 65 mph, enabling asset owners and professionals working in energy or transportation, and to capture high-quality geospatial data in safe, enclosed spaces without disrupting traffic or other elements of public life in urban areas. 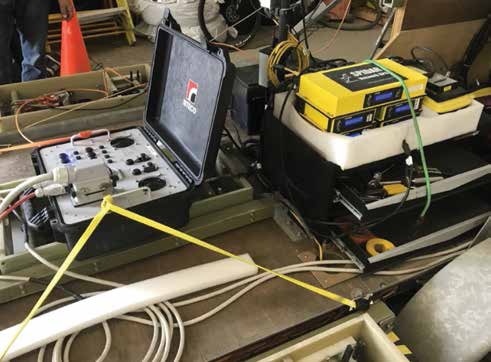 The RS-C system was mounted on SSI’s existing trailer, already outfitted for a GPR antenna configuration with 2 x 250 MHz outer antennas and a single central 1,000 MHz antenna, calibrated with the standard GAMS procedure. Additionally, the RS-C was configured with older FARO Focus technology scanners as well as the newest models, demonstrating the full backward compatibility of the technology for customers with existing FARO scanners.

Underneath the trailer cap, power was supplied for the RS-C and the data collection control unit for the SSI GP by a 12V fast-cycle marine grade battery, capable of supplying up to three hours of continuous power to both systems. A dual GPS antenna system was employed to provide a baseline for the inertial navigation system in order to correct trajectories. 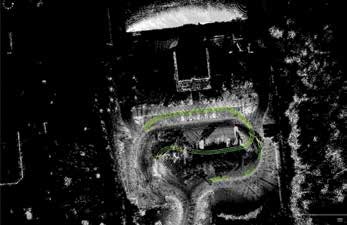 We completed two phases of testing for the RS-C to confirm the capabilities of the data-collection technology and roadway system near Sensors & Software’s facilities. We were looking specifically for features at a circular parking area in front of a nearby soccer dome.

The initial test drive was performed in May of 2018, covering approximately 2.5 miles in 15 minutes. This test confirmed that the system technology collected data as expected. A few days later we performed a second, more comprehensive test, collecting data from nearly 12 miles over a one hour period. This second test included a wide variety of paved roadway environments, testing the range and breadth of applications of the RSC. The system was able to successfully collect data at speeds ranging from 6.2 mph up to 52.8 mph.

The accuracy of the data is in line with the published specifications of the equipment. In Image 1, the lidar intensity points are clearly visible and show the markings on the parking lot area along with the GPR data traces (in green). These are important to note because they allow for safe and precise location of subsurface elements.

Image 2 shows that once we focused in closer to the surface, tilted the dataset, and removed the lidar information, the central antenna is shown with its much shorter range than the outside antennas on this single pass. The antenna’s higher frequency gives less depth penetration, but higher resolution data. 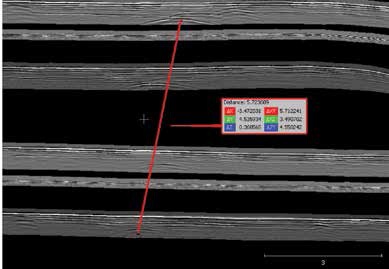 In Image 3, we widen the viewing area and remove the color lookup table, replacing it with the grey amplitude map of the radar (this is the more traditional method for visualization of GPR data in linear strips) across two discrete data collection passes. Further analysis showed a buried power cable, which is known to be in this area.

Results of our test demonstrate that the RS-C data capabilities significantly cut survey time, while the equipment creates a safer work environment. We feel this is a groundbreaking advancement in improving safety and data collection efficiency in SUE/SUM. The project clearly demonstrated the comparable nature of data collected by traditional utility surveying methods and that which is collected on active roadways at posted speed limits.

The combination of 3D laser scanning technologies, 3D underground imaging and multiple geophysical technologies such as Ground Penetrating Radar — combined with 3D software platforms — makes it possible for designers to acquire high-value, three-dimensional electronic files in the planning stages of a project, using vehicle-mounted systems traveling at posted speed limits. The rise in cost-effective data capture instrumentation is driving this revolution. Merging SUM technology with GPS, laser scanning and multi-spectral technologies through applications such as AutoCAD Civil 3D will open a new era in project planning and design, closing the gap in the damage prevention process for underground stakeholders and saving lives by preventing accidents.