Buried utilities are vital for the functioning of today’s cities as they provide gas, water, electricity, broadband and the removal of sewage and surface water. Mankind has used buried infrastructure for eight millennia, perhaps more. These assets, and their locations, are often not well documented. The Mapping the Underworld initiative started with the problem of buried asset location – we must know what is below the surface, and where it is located, if we are to engineer in the space below the streets effectively and safely. This is a problem that has been articulated by United Kingdom (UK) urban professionals for as long as the built environment has needed servicing. However, the problems associated with the location of existing buried utilities are emphatically not unique to the UK and have been presented at the International No-Dig (Trenchless Technology) conferences since they started in 1986. 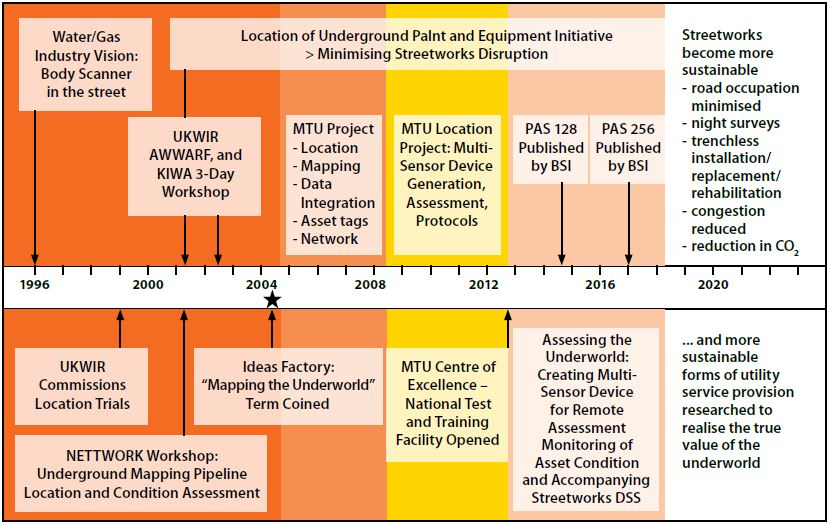 It was in 1996 that Tony Rachwal, Director of Research at Thames Water, crystallized the arguments by stating that we needed a “body scanner for the street”. After significant lobbying by the industry, the UK research council funded a feasibility study to explore the need for a combination of different sensing technologies if all buried services in all ground conditions were to be detected. The multi-sensor feasibility study not only proved the concept, but also helped to define a rigorous and detailed four-year program of work termed the MTU Location Project, or Multi-Sensor Device Project. This stage of MTU started in 2008, was completed in the summer of 2013, and is reported in its own brochure and numerous journal and conference papers, practitioner articles and other outputs.

It was always understood, however, that MTU formed part of a 25-year vision that would be complete only when streetworks engineers could be supplied with as much prior knowledge of the environment in which they are required to engineer and a comprehensive picture of the likely consequences of their engineering actions. Accordingly, funding was awarded for an ambitious follow-up program of research entitled Assessing the Underworld. Its vision was to create an integrated streetworks assessment framework encompassing the three interdependent infrastructures that coexist in our urban streets – the surface transport, buried utilities and geotechnical infrastructures – and then to evaluate the condition of these infrastructures, and to support coherent, intelligent and sustainable management of streetworks.

Put more simply, for reasons of minimizing direct costs and to address uncertainties (of what is buried beneath the streets and its physical condition), trenching is often used in urban streets to install or maintain buried pipes and cables. Such excavations inevitably cause lateral stress relief displacements and, therefore, weaken the ground, cause differential movements in the pipes and cables that lie adjacent to or across the excavation (accelerating their deterioration, sometimes to the point of immediate failure) and weaken road structures by cutting through the slab, loosening the unbound foundation layers and patching in replacement materials. All of this is done while disrupting traffic, damaging the economy, society (inconveniencing people and the social systems that operate in cities) and the environment (e.g. exacerbating pollution).

It should be recognized that this ambitious, multi-disciplinary program has, from its inception, been a partnership between academia and practitioners. This partnership was demonstrated in a range of activities for which the academic partners are able to provide an evidence base. There exists an underlying need to form a business case that justifies the use of more expensive sensor technologies and use of advanced survey techniques. It is important to know the return on investment of spending more money on surveys upfront, or doing things differently and the cost savings as a result. To address this gap in knowledge, a parallel study was conducted as part of iBUILD project to look into the true cost of utility strikes. Sixteen utility strike case studies were investigated where the direct costs, indirect costs (if any), and social costs (if any) as a result of the utility strike in question were estimated. The study showed that the additional costs (indirect and social costs) when accounted for, can be as much as 29 times larger on average across all 16 case studies than the direct cost of repair, which is more often than not the only cost consideration made by industry in the event of a utility strike incident. A change in perception and a corresponding change in the current streetworks business models is required to address this ongoing streetworks challenge. For example, Transport for London (TfL) has already changed some of their practices when it comes to utilities streetworks, by way of a memorandum of understanding in cooperation with several asset owners, with a focus on best practice implementation of PAS128.

A recent development has been the formation of the UK Collaboratorium for Research in Infrastructure and Cities (UKCRIC). This is a once-in-a-generation investment from the UK Government of £128m, matched by funding from industry and the collaborating institutions, to establish capital facilities at 14 universities. The investment includes the National Buried Infrastructure Facility (NBIF) at Birmingham, which will drive research, development and innovation in trenchless technologies, utility detection and management and geotechnical engineering.

Nicole Metje is Professor of Infrastructure Monitoring in the School of Engineering at the University of Birmingham, UK. She is also Deputy Director for Sensors of the National Buried Infrastructure Facility (NBIF). She is involved in utility detection standards in the UK, U.S. and Hong Kong. Nicole can be reached at N.Metje@bham.ac.uk.