EVERY UNDERGROUND service can be located if you throw enough time and money at the task, but as a professional Locator, one of the most frustrating situations I find myself facing all too often is having to explain to a client why the cost for a service locate is so high when they had an expectation that it should be straightforward. 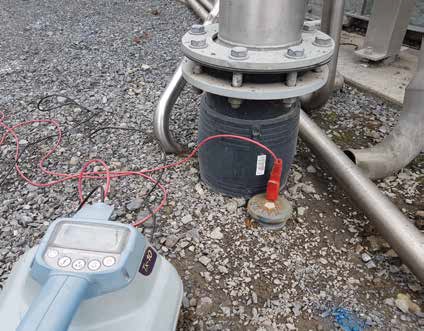 As all of us know, circumstances can conspire against you to make an otherwise seemingly simple locate a real challenge. However, there’s one situation that I find more annoying than any other and that’s where but for a simple and inexpensive traceable element, we are left with years of difficult locates.

Non-conductive, closed facilities such as gas lines and liquid reticulation systems all pose a significant challenge for a locator. An inability to inject an EM signal or gain access to an entry point for a tracer rod or sonde immediately limits the options for the locate.

In such cases, many of us turn to Ground Penetrating Radar (GPR) as the most effective locate technique. As great as this technology is, it has certain disadvantages; it is a much slower process than tracing an EM signal, it is directly affected by the surface terrain encountered, and can, in a congested situation, provide little assurance as to the identity of a particular service.

Such non-conductive, closed facilities could be located with the same relative ease as conductive services with the use of a simple tracer wire. In many cases it’s an inexpensive addition during installation that could save many years of unnecessary additional locating costs for any given underground facility. Sadly, in far too many cases it is not considered, either because it’s seen as an unnecessary extra cost or because it’s too difficult to install.

Such short-sightedness and misunderstanding inevitably leads to an unnecessary future cost burden associated with locating that facility over the many years of its active service.

While thinking about this issue, it occurred to me that there must be a way to show that “a stitch in time saves nine” when it comes to making underground services easier to locate.

It should be possible to show that long-term cumulative locating costs in many cases far outweigh the original cost of a locatable addition at installation time. While a return on investment (ROI) is usually most beneficial to whoever met the original costs, when it comes to underground facilities, the benefit would spread over many future parties and stakeholders.

To show the long-term benefit of traceability, I believe there’s value in defining a metric of some form and so I coined the phrase “Lifetime Service Locate Cost” (LSLC). For arguments sake, let’s say the LSLC is a way of measuring the cumulative costs of locating a standardized section of an underground service over its lifetime. If we were to calculate the LSLC for an easily traceable service versus one that is not, we should be able to show a differential in cost and, therefore, determine which one offers the greatest long-term savings or return on investment.

Nothing about the following example is based on hard research. It’s more of a “back of the envelope” calculation, but it’s sufficient to support my argument for making a service more easily locatable.

For the purposes of this example I’ve made a few assumptions:

• the service has a general expected life of 30 years

• an EM-based locate would take 0.5 hours to complete

Based on these assumptions, the LSLC for the easily traced method is approximately $2,700, while for the more difficult and time-consuming approach it is around $27,000.

As simplistic as this example is, it’s very clear that making a service more easily traced could result in huge long-term savings. Remember, those extra costs are met by someone, the utility, government, private contractor, etc.

Purely on an economic basis, asset owners, contractors, and engineers involved in service installation should be looking further ahead than just short-term costs savings. Simple ROI aside, there are many other real benefits to better traceability including reduced risk of damage, injury and loss of life.

Innes Fisher is Managing Director of Utility Location Services Ltd., located in New Zealand. He can be reached at innes@utilitylocation.co.nz.