It’s Sweet to Give Back 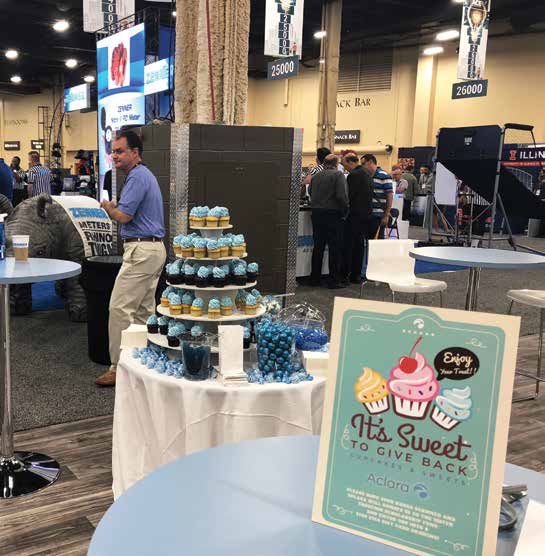 Conferences are traditionally events where vendors find buyers and buyers expand knowledge and find solutions to challenges they face. Aclara, part of the Hubbell family of brands, expanded that definition at the recent American Water Works Association (AWWA) ACE18 show in Las Vegas.

The company organized a fundraiser at its booth for AWWA’s Water Equation scholarship fund, contributing $5 for every badge scanned during the event, which occurred on the first day of the exhibition, June 12. Blue and white cupcakes and candies enticed attendees into the booth for the event, held under the moniker It’s Sweet to Give Back.

The Aclara marketing team designed the event to integrate the company’s philanthropic goals into their tradeshow strategy. The program gave people a reason to visit Aclara’s booth that extended beyond learning about the company’s solutions while also giving them the opportunity to support a good cause.

“We really wanted to put into the effect the old adage, ‘People won’t care how much you know until they know how much you care,’” said Josh Chaise, vicepresident, product management and product marketing for water and gas. “It’s easy to forget that a company is more than its products – it’s an organization of people who care about other people.”

The Water Equation collaborated with Aclara to advertise the It’s Sweet to Give Back event. Both Aclara and the Water Equation promoted the event with signage, direct email and on social media. Announcement of Aclara’s in-booth event were also made in various sessions at ACE18.

“We had numerous people coming into the booth specifically because we were supporting the Water Equation,” said Chaise.

Aclara’s It’s Sweet to Give Back event raised $1,700 for Water Equation scholarships.

Aclara historically has supported a variety of water-focused charities including AWWA’s Water for People non-profit as well as Water.org, both of which concentrate on creating water and sanitation infrastructure in developing countries. It chose to support the Water Equation to encourage further education of young people working in the water industry.

The Water Equation funds academic and operator scholarships for professionals in the water industry. It’s Abel Wolman Fellowship, named after the creator of a controlled chlorination method, supports promising doctoral students from the United States, Canada and Mexico who are doing advanced training and research in water supply and treatment. It also matches funds raised by AWWA’s 43 sections in support of the One AWWA Operator Scholarship for continuing education.

To learn more about Water Equation or to donate, contact the organization at www.awwa.org/donate/about-the-water-equation. Learn more about Aclara at www.aclara.com.