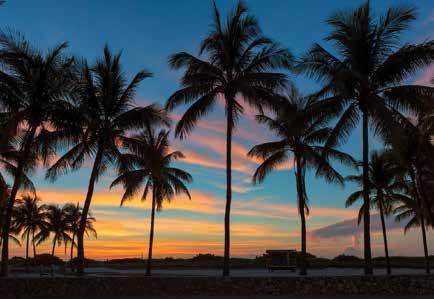 The Federal Emergency Management Agency (FEMA) has awarded the town of Palm Beach, Florida an $8.5 million grant to remove utility poles and bury overhead power lines. The town was notified in October that they were approved for the money under FEMA’s Hazard Mitigation Grant Program. The grant amounts to more than eight percent of the entire town-wide conversion to underground utilities, which is estimated to cost $102 million.

FEMA’s Hazard Mitigation Grant Program funds become available following the president’s declaration of a major disaster. In this case, the disaster was Hurricane Irma, the 2017 storm that swept through South Florida, causing widespread destruction in the Southeastern United States.

The town is burying all overhead power, cable television and phone lines in eight phases. The work began in 2017 and is expected to be completed in 2026. Kevin Schanen, vice president at Kimley-Horn and Associates, the town’s undergrounding consultant, said there is “quantifiable data” that shows an underground utility system outperforms an overhead system in withstanding major storm damage.

“Severe winds can cause poles and/or overhead lines to fall, damaging property and causing both power outages and risk of electric shock,” FEMA said in a release. “Burying these lines can increase the resilience of the power grid and reduce impacts to people and property.”

In August, the Commission assessed $864,689 in fines…$315,187 to operators who were fined for oil and gas, LP-Gas or pipeline safety rule violations, and $543,000 to pipeline operators and excavators for violations of the Commission’s Pipeline Damage Prevention rules. An additional $6,202 in penalties were assessed to one operator for failing to appear at Commission enforcement proceedings.

In October, the Commission assessed $319,693 in fines… $24,176 to operators who were fined for oil and gas, LP-Gas or pipeline safety rule violations, and $241,750 to pipeline operators and excavators for violations of the Commission’s Pipeline Damage Prevention rules. An additional $53,767 in penalties were assessed to seven operators for failing to appear at Commission enforcement proceedings.

The federal investigation into the 2017 explosion that killed two people and destroyed a home in Firestone, Colorado determined the likely cause to be a natural gas leak through a pipeline that had been severed during construction of the home. The report, released by the National Transportation Safety Board (NTSB) in October, also blamed the government of Firestone for allowing residential development on former oil and gas fields without full knowledge of where pipelines remained buried underground.

“Contributing to the accident was the approval by local authorities to allow occupied structures to be built on land adjacent to, or previously part of, oil and gas production fields without complete documentation from the operator, Anadarko Petroleum Corporation, on the location and status of its pipelines,” the report stated.

The explosion occurred when owners of the home were replacing a hot water heater in the basement. Investigators found a one-inch diameter black plastic pipeline running from an Anadarko well near the house that had been cut two years prior when a tank battery was moved before the subdivision was built. That pipeline was leaking gas and investigators found the gas valve at the well was in the “on” position.

Previous owners of the well, Patina Oil and Gas Corp., recorded the pipes connecting the wells as being abandoned in 1999… but the report showed this to be incorrect. Andarko acquired the well in 2013 and in 2015 temporarily shut it in, however the well was not plugged and no pipelines were abandoned, according to the NTSB report.