The Alabama Damage Prevention Summit, scheduled for September 25-27, 2018 at the Embassy Suites in Montgomery, is designed to bring all stakeholders together to discuss issues within their own locations. This year’s event includes a golf tournament and Locate Rodeo.

The Summit is a unique event for industry professionals looking for better ways to work together. Stakeholders typically represented include local elected officials, regulatory personnel, One Call staff, excavators, locators and utility owner/operators. The utilities generally represented at the Summit include gas, electric, phone, cable TV and water/wastewater.

Networking opportunities are available through workshops, training sessions, live demos and an informative exhibit hall. The Summit is the place to network with experts who have a common commitment to protect underground facilities while keeping your community a safer place to live and work.

The 10th Annual Pipeline & Energy Expo brought together industry leaders from the Gas & Oil industry while focusing on developing the next generation. Many times throughout the expo, it was mentioned that Tulsa once held the coveted title of “Gas & Oil Capital of the World” and it was evident the passion to ensure the industry stays strong for the next generation remains. The University of Tulsa offers a Masters of Energy Business program focusing on providing individuals the skills to run and manage an energy company. During their Student and Young Professionals Networking Session, Colby DeWeese, Facility Engineer with MarkWest Energy was paired with Ed Wiegele, President (Oil & Gas Sector) with TRC Solutions. Colby shared his perspective as a recent graduate and now project engineer while Ed shared his veteran perspective. Walking the exhibit floor, exhibitors ranged from engineering and consulting companies, service providers, business solution experts, construction, maintenance, and, of course, schools. The commitment of the Pipeline & Energy Expo to the industry while discovering emerging talent was refreshing.

Across SoCalGas’ service territory, about 60% of pipeline damage due to digging is caused by homeowners, contractors and excavators who fail to call 811 before digging. “Last year, SoCalGas recorded close to 3,000 cases of damage to underground infrastructure caused by customers who did not call 811 prior to digging,” said Rodger Schwecke, SoCalGas senior vice president of gas transmission, storage and engineering. “Data shows that when customers call 811 before digging, the likelihood of hitting a utility line is decreased by 99 percent.”

Throughout the month of April, SoCalGas partnered with Angels Baseball to remind fans to contact 811 before digging. In addition to the giant shovel, the partnership included radio spots and in-stadium marketing that included digital signs and video.

Hampton, NH – A March nor’easter storm is being blamed for a sewer pipe break, according to Hampton Beach public works officials. Beach sand was found around the opening of marsh-top vegetation, where raw effluent was found bubbling from the underwater. Officials say the sand was likely drawn into the pipe as a result of flood water during the March 2nd storm and could have caused corrosion in the pipe.

The pipe was shut down after the leak was discovered. It is one of two pipes that run from the Church Street pump station to the wastewater treatment plant. Public works officials indicated a temporary fix of the pipe cost about $100,000, with plans calling for the pipe to be replaced in the near future. Voters rejected a $4.2 million proposal to replace the pipes in 2017 after selectmen argued it was a priority to do so.

Shreveport, LA – The city of Shreveport is becoming one of the largest users of trenchless technology in the country as it continues the work started back in 2014 to repair aging, crumbling water and sewer lines. 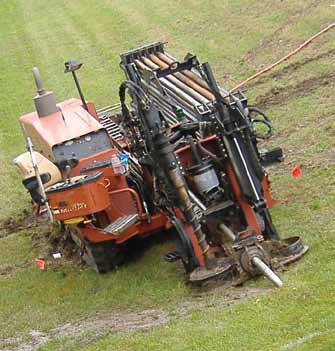 According to Fredrick Mac-Aurele, senior project manager for CDM Smith, a consultant for the city of Shreveport, trenchless technology is being used to repair the lines because it causes little, if any, disruption. “If we had to open cut a line between two manholes, the trees would be threatened. We would be tearing up all the surface improvements and that would be expensive to restore. It would also be time-consuming,” Marc-Aurele said. “We can do a 500-foot section of trenchless technology in a matter of hours, where that same 500 feet could take an open cut contractor a week to do, not including all the restoration.”

August 8-11: JJ Harrison at Herniston, OR