Increasing The Visibility Of Safe Digging Plans In The UK 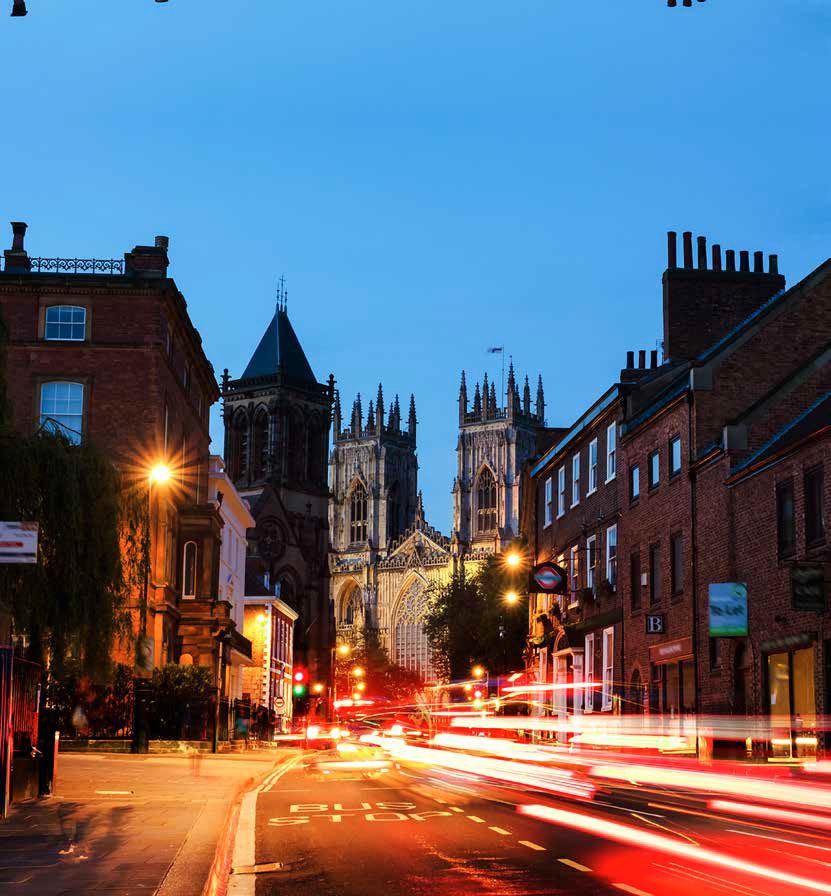 Providing asset records to all those who need them reduces the risk of utility strikes. Sounds obvious, doesn’t it?

As a small island, with a large population and a long industrial history, the UK has many organisations with buried infrastructure; some of which operate working assets that have been in situ for hundreds of years. Some of these organisations own hundreds of thousands of kilometres of assets whilst others may only own a few metres. What connects them is the duty to protect their infrastructure from third-party damage, although there are varying interpretations of what they need to do to achieve this.

Contrary to practices elsewhere in the world, the One Call principle has not been enforced through legislation in the UK. The third-party enquirer carries the responsibility to make the necessary checks of which assets may be near their job site. There are various legislative requirements that state utility networks need to share information but nothing specific to say what method, how quickly and at what cost.

As a result, there has always been a myriad of practices across the UK’s asset owners. M any originally developed their own systems to provide plans such as simple GIS viewers, supplying mapping Cds, and email, postal or telephone services.

Some will provide asset plans free of charge, others will charge any non-statutory enquirers and some even demand a fee to check if they have any assets in a location (this tends to be particularly prevalent in the telecom sector). Timescales for responses can be anything up to 28 days! 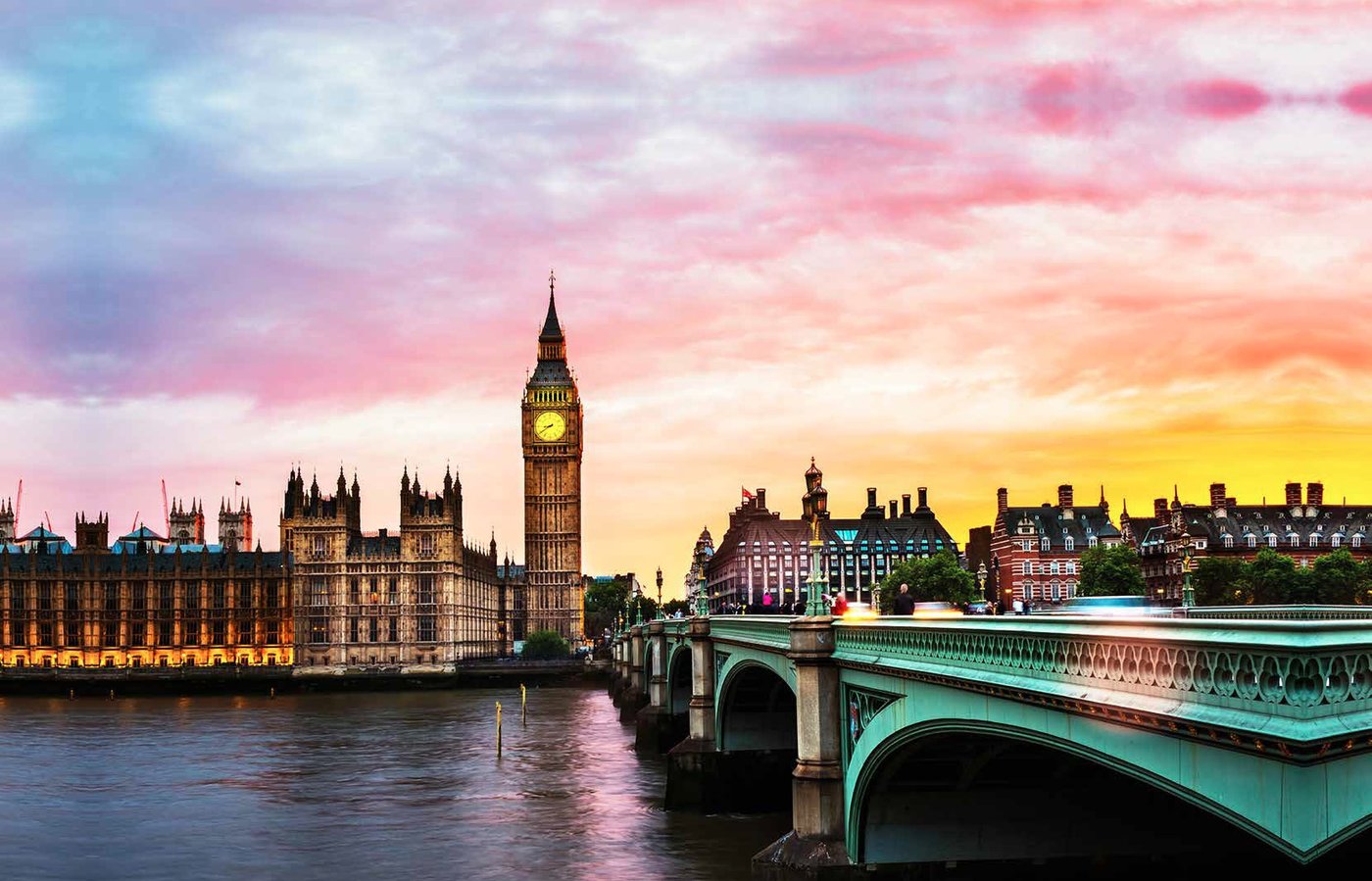 Understanding responsibilities and learning from experience

Irrespective of the practices, the focus of responsibility is on the person doing the work (the enquirer) getting the plans and locating the assets themselves before works commence. Accordingly, they need to know who may have assets, how to contact them and then spend many hours compiling the various information. With hundreds of organisations owning underground infrastructure, knowing who to contact in any given location can be a considerable challenge.

Due to the uncertainty, there have historically been some high profile near misses; none closer than an incident in 2003 in Hunton Hill, Birmingham. The area is densely populated and close to several major transport networks.

A subcontracting company undertaking a gas connection, working from incomplete plans, mistook a 12” multifuel pipeline for a 6” gas pipeline (that ran down the adjacent street) and started drilling the pipeline (Figure 1). Those undertaking the works were unaware that gas oil (and subsequently petrol) was running through the pipe at more than 80BAR. This incident is the closest the UK has come to a high-profile fuel pipeline related incident and has fortunately served as a stark learning tool for thousands of contractors across the UK without loss of life. Reports at the time suggested that there could have been hundreds of fatalities if the pipeline had ruptured.

Learning from the causes of utility strikes

Despite a strong health and safety culture in the UK, many asset owners do not record the underlying cause of each utility strike or near miss. The Linewatch Group (linewatch.org.uk) compiles an annual near miss report with detailed analysis from its members, which are predominantly fuel and gas transmission pipeline operators. Unfortunately, such methods of recording data are not shared by the larger distribution utility network operators, so these learning points are not shared.

The Utility Strike Avoidance Group (USAG) also plays a key role in this area, providing resources for safe digging practices and producing an annual report based on strike reports from across the sectors. The data is provided by a wide range of stakeholders across the industry and whilst well received, the conclusions are limited to the information held by its contributors on the causes of each strike.

As a result, there is too little linkage between the methods of plan provision and the risk of utility strikes, with some internal departments not aware of each other’s practices. Established international studies such as the US DIRT Report (commongroundalliance.com/media-reports/dirt-reports) reinforce how critical a One Call system is for any damage prevention strategy.

The good news is that utility strike avoidance is gathering importance and attention across all sectors in the UK; not just in the higher risk sectors (fuel/gas/electricity) but also including telecoms operators that are aware that their networks are part of the critical national infrastructure.

Accordingly, there is a growing trend to link the provision of asset records to any near misses or strikes so that lessons can be learnt. Particularly in today’s cyber security conscious environment, and with the risk of terrorism a real concern, this can’t just be all asset owners putting their assets onto a single map and giving it to everyone; any sharing needs to be done with a security-minded approach.

LinesearchbeforeUdig (LSBUD) is a free-to-use service that is modelled on the One Call principle, allowing instant results on behalf of multiple asset owners. Started in 2003 with just 4 transmission fuel pipeline operators, it is designed to improve safety of the networks and to allow enquirers to work safely and efficiently. Now in its fifteenth year, it protects over 70 members’ assets, including over 600,000km of critical national infrastructure including: 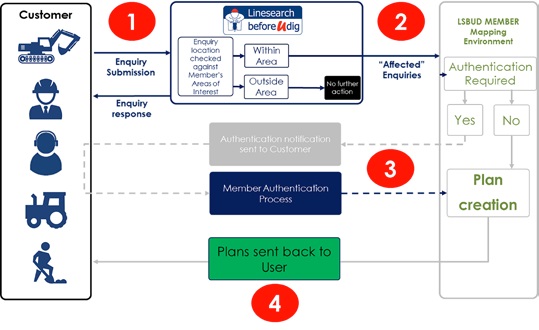 It processes over 2.25 million enquiries per annum; approximately 10,000 per working day. That’s the same volume of enquiries in a day that the service received per year back in

A key advantage is that it allows its members to collaborate in the One Call manner but also allows for each member to apply specific rules and processes in their environments. An indicative snapshot of the architecture is seen in Figure 2.

The service allows each asset owner to significantly increase the visibility of their assets to those undertaking works but by using automated plan response software, can achieve this with a net reduction in administrative requirements.

SGN manages the gas distribution network (GDN) across Scotland and the south of England, providing gas to over 5.9 million people through a 74,000km gas pipeline network. Part of its responsibility to provide gas to its customers includes ensuring the safety of its asset network from accidental damage from third parties working near the pipeline.

SGN joined the service in April 2017. The initial results are shown in Figure 3.

Reducing the turnaround time from 15 days to just 4 minutes as well as significantly increasing the volume of responses sent helped the SGN and LSBUD teams to be shortlisted for the Streetworks UK Best Collaborative Work Award. A full case study is available on the LSBUD website. cdn.linesearchbeforeudig.co.uk/pdfs/lsbud-cs-sgn.pdf

Using the platform as an active asset management platform

One of the most exciting aspects is that SGN uses the system as an active asset management platform to not just provide the plans but also understand more about what works are taking place near its network. Through configurable settings, its Plant Protection Officers are alerted when particular types of work are taking place near various asset types. For example, if there are deep excavation works planned near a high-pressure gas main, the relevant SGN officers are made aware of the work and can engage with the third party at an early stage to provide advice and support on digging safely.

LSBUD is working with SGN to ensure further enhancements can be made to assess the multitude of works taking place near its network. Being able to analyse data on a large scale through LSBUD will help further support SGN’s asset management policy in years to come, ensuring the continued safety of its network and the general public.

It is a promising time for damage prevention in the UK, with many bodies increasingly linking the better provision of asset records as a fundamental driver for the reduction in asset strikes. It is encouraging to see how major utilities such as SGN, UK Power Networks, Western Power Distribution, National Grid and many more are collaborating for the greater good of the industry. Through cooperation and collaboration, all stakeholders are reaping the benefits, re-emphasising the view of our colleagues across the pond in the US that damage prevention really is a responsibility shared by all.

Richard Broome is Managing Director of LinesearchbeforeUdig (LSBUD), Partner of Fisher German LLP and Steering Group Member of the Utility Strike Avoidance Group. As Managing Director of LSBUD, Richard is responsible for running the business that provides hundreds of thousands of safe digging plans and advice to users across the UK. He can be reached at richard.broome@lsbud.co.uk.