Help Me HELP YOU

Did you know locators don’t locate?” The contractor shouted the question to a small group of onlookers gathered around the damaged electric cable, then shouted again gesturing for dramatic effect. “Because I didn’t know that. I thought when you called a locator you got locates!”

I stood by quietly, willing myself to remain calm. It was a rare day, one of the few where I’ve been called to a site where a damage has occurred after my company has performed a locate. The contractor was mad because he’d hit two electric lines in a week; one public, and now one private. I’d just finished explaining to him that there was no reason my tech would necessarily have known the line he hit existed. There were no obvious visual cues to tip a technician off and it may or may not have been detectable on a passive frequency before it was damaged. That the crew was digging beyond their original scope was deemed irrelevant. That the line they had struck was not the one they had originally requested to have marked was also irrelevant. The contractor had paid $150 four weeks before for a private locate and now they had struck a private line. “I guess I’m still learning,” he yelled. And in my head, I was forced to agree with him.

His rant was a version of a narrative I’d heard from excavators many times before as a private locator. It was a brother to “then what good are you?” (Often asked at the completion of a job when I ask them to sign my work order acknowledging that we don’t offer a guarantee.) and a cousin of “if I knew that, I wouldn’t have to have you here!” (Regularly given in reply when I ask my customers if they’re already aware of any private utilities that might be in conflict). Frankly, I’m used to it, and as someone who prides himself on customer service, I have friendly, semi-scripted replies to pretty much any static I catch on a jobsite, but it does still surprise me how often professional excavators are really in the dark about what a private locator can and can’t do for them.

Unlike public facility locators, we often work without the guidance of as-builts or prints of any kind. We rely heavily on topside observations and information provided by our customers, or our customer’s customers, to give us insight into what hazards might be lurking below on a jobsite. We also use our own curiosity, common sense, and experience to reveal conflicts that might otherwise have gone unknown. In other words, we use the tools available to us to drive down an excavator’s chances of having a damage. Unfortunately, we don’t eliminate that chance and sometimes private facilities do get damaged. Electromagnetic induction does have its limitations and even when a competent technician performs a prudent locate on a jobsite, utilities can remain undetected. 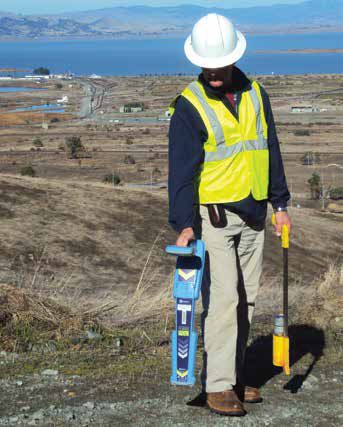 I often remind my customers that calling for private locates is like wearing a seatbelt. It’s not a guarantee against a negative outcome, but it sure beats the alternative. Oh, and for anyone reading this who’s already framing up excavator/locator arguments, watch out for that guy sheepishly slipping around the corner to escape his share of the blame. Coming next issue: “The Case of the Absentee Facility Owner”.

PrevPreviousIt’s Sweet to Give Back
NextThe Future of Damage PreventionNext