Guess What I FOUND!

As a private utility locator, I often serve customers who have no idea what, if anything, might be in conflict with an upcoming dig. “That’s why you’re here,” they often joke with me. It’s not an ideal situation, but there are steps private locators can take to help make an excavation safer, even with no maps and no topside indicators of what might be found below. We usually begin with a “safety sweep” in both the passive power and passive radio modes to see if any signals can be found and then move on to an active search using a high-frequency signal in the inductive mode. 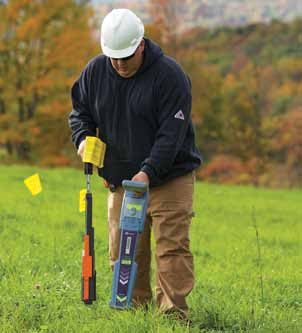 Sometimes signals are detected and sometimes they aren’t. When signals are detected, we generally follow them to a termination point in an attempt to determine what type of facility we’ve found, but the results aren’t always conclusive. Sometimes they simply end at a wall and we don’t have access to look at them from the other side. Sometimes we follow them for a little way and the signal fades or terminates abruptly. Sometimes our customer doesn’t want to pay us to keep looking once we’ve found a signal. Just knowing something’s there is enough for them; they’ll change their plans to avoid the obstacle. This is often the case with environmental borings.

Each of the above cases leaves a locator with a central question: What color do I use to indicate a facility of unknown type? My preference has always been red (designated for electric facilities by the APWA) particularly since I often find these types of mystery lines using the passive 60Hz signal. Of course, just because a facility carries a 60Hz signal doesn’t necessarily mean it’s electric. I’d feel odd painting an unknown facility in yellow (the color for gas, oil, and steam) because that seems alarmist and I’m liable to be found wrong. Orange might give the excavator a false sense of security about digging over a line. Telephone damages might cost money, but they rarely hurt anyone and I’d hate to see someone shocked by an electric line I painted orange. Blue (for water) seems an unlikely candidate because water lines in my area just aren’t shallow enough to show up on many of my sweeps, and green (sewer) seems unlikely since most of those facilities are non-conductive and don’t provide electromagnetic signatures. White is for proposed excavation, so that’s out, and so is pink – which is reserved for surveyors. Red it is then. Which is fine, except – I’m really not sure, am I?

A colleague of mine who also locates private facilities recently found and marked a signal at a gas station prior to soil borings. He used a dashed red line to indicate what he’d detected. If he hadn’t found it and marked it, it would have been unknown to the contractor entirely. The contractor, assuming the mark was for a single electric line, placed a bore just a couple feet away and damaged what turned out to be a series of parallel conduits. My colleague is now in the midst of an expensive damage claim that his insurance company is leaning toward paying. Why? Because the mark he made was technically not correct. Never mind that he had no way of knowing what it was he was picking up.

After learning of his experience, I’ve started using red corridor markings to indicate the variety of unknown facilities I find. I don’t know what else to do. I’ve also ordered red and white striped flags imprinted with the words “UNKNOWN UTILITY TYPE, SIZE, AND NUMBER”. It’s time to have a discussion on how to mark unknown facilities, including perhaps a unique color. Private utility locators prevent a lot of damages to facilities that otherwise would be completely at-risk. There should be a mechanism for us to mark an unknown facility without being forced to guess what we’ve found.

THE OPINIONS EXPRESSED IN THIS ARTICLE ARE THOSE OF THE AUTHOR. dp-PRO WELCOMES AND ENCOURAGES ARTICLES AND CORRESPONDENCE FROM ALL POINTS OF VIEW.

1 thought on “Guess What I FOUND!”