On May 23, 2013, two elementary students on a school field trip died when they were buried by a landslide in Lilydale Regional Park, St. Paul, Minnesota. Later that year, on June 30, 2013, the United States experienced the greatest one-day loss of life in the wildland firefighting community in nearly 80 years when 19 members of the Granite Mountain Hotshots were overtaken by a wall of fire during the Yarnell Hill Fire. And, on December 29, 2015, Shanell Latrice Anderson drowned as she frantically pleaded for help on her mobile phone with a 911 call center as her car sank into a pond just off a residential street in Cherokee County, Georgia. Although each of these well-publicized incidents may seem unrelated, there is a common thread which runs through them. Emergency response – perhaps lifesaving emergency response – was significantly delayed by the lack of a standardized and accurate way to effectively report the location of each incident as it happened. Communication of location using the United States National Grid (USNG) could have solved this problem.

THE PROBLEM WITH STREET ADDRESSES

For most responses, street addresses work well. However, as in the cases above, there are many instances where the U.S. needs a consistent emergency response language of location which can be used to supplement the traditional street address approach to dispatch and response. Consider some of the following issues: 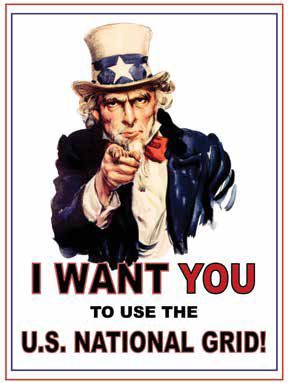 WHAT IS THE U.S. NATIONAL GRID?

After World War II, the U.S. and its NATO allies created the Military Grid Reference System (MGRS) – a location-referencing and reporting system used for military ground operations around the world because it is much easier to use accurately and less prone to human errors than latitude/longitude. Some 50 years later, the federal government followed up by sanctioning creation of a cartographic standard for civilian use which leverages the time-proven concepts of MGRS. After incorporating some subtle but important improvements to the MGRS standard, which create greater flexibility in how the coordinate string may be used, that part of the worldwide MGRS which overlays the U.S. became designated as the U.S. National Grid.

WHO PROMOTES USE OF USNG?

In the years since the USNG standard was approved in 2001, increasing numbers of federal, tribal, state, and local governments, as well as some commercial entities and geospatial associations, have mandated or promoted use of USNG. Forefront in these decisions has been the understanding that just like the military’s use of MGRS, USNG facilitates quick communication and teamwork during operations where time and clarity of location information are life and death issues.

Some examples of expanding U.S. National Grid adoption include:

• USNG is displayed on all disaster map products produced by the National Geospatial-Intelligence Agency (NGA) and is prominently featured in the U.S. Geological Survey’s (USGS) free and popular map series for the public, US Topo.

• In November 2011, the National Search and Rescue Committee (NSARC), a federal committee which includes representatives from the Department of Defense, Commerce, Interior, Transportation, Homeland Security, as well as NASA, and the Federal Communication Commission, designated USNG as the standard for all ground-based Search and Rescue (SAR) operations in the United States.

• The technical documents for 911 call center implementation include USNG as a preferred re- porting coordinate standard and USNG is similarly included in numerous National Fire Protection Association (NFPA) publications.

Most importantly however, in October 2015 FEMA released Directive 092-5, Use of the United States National Grid (USNG). The intent of the Directive as embodied in the Policy Statement is as follows:

“FEMA will use the United States National Grid (USNG) as its standard geographic reference system for land-based operations and will encourage use of the USNG among whole community partners. FEMA will reference and employ the USNG in doctrine, relevant preparedness and grant programs, deliberate and crisis-action planning, training, exercises, operations, logistics, and other appropriate disciplines.”

In application, this directive means USNG is now used by the federal government’s pinnacle agency for managing the most extreme of emergency responses – national disasters. Additionally, in line with the concept of “you respond like you train”, FEMA is also encouraging all other response entities in the local-federal hierarchy to do the same. As such, some examples of change underway include: USNG is now used by all federally funded Urban Search and Rescue (USAR) teams, it is a mandated location reporting standard for federal disaster assessment and associated post-disaster funding, and USNG can be found to increasing degree in federal and state emergency response-related documents such as the National Incident Management System (NIMS).

HOW DOES USNG WORK?

The USNG uses a string of up to 15 characters to describe a location. The first three characters are a GRID ZONE designation. Next, two letters identify a 100,000-meter SQUARE (100 km, about 62 miles square) in the GRID ZONE. Then come distances in meters (m) from the 100 km SQUARE’s lower left corner, RIGHT (Easting), THEN UP (Northing). These numbers roughly equate to a percentage of movement across a full square. The number of digits after the SQUARE’s ID determines the precision of the coordinate, with eight digits used as the default standard for describing a location:

A question commonly asked after considering the above information is: “What about cell phone tracking technology; isn’t that a better way to determine where help is needed?” Inherent in that question is the mistaken belief that cell phone location tracking is always accurate. Early in 2018, several U.S. national news organizations offered stories about problems with using system-reported cell phone location to determine actual location of an emergency call. In one case cited by NBC Nightly News, the reported and actual locations differed by more than ¾ mile. Amplifying the seriousness of this cell phone location inaccuracy issue, surveys have found that more than 50% of U.S. households have disconnected their hard-wired house phone and are now only relying on their cell phone for an emergency call. Given a hard-wired number at a minimum provides an address for a response, and that cell phone location information degrades dramatically inside structures like homes and office buildings, the dimensions of the cell phone location inaccuracy problem is getting worse over time, not better.

Correspondingly, companies like Google, ESRI, Intel, Sanborn, HERE, and a variety of other smaller geospatial entities have been attempting to insert themselves into the discussion about the need for a simple and precise way to communicate location by taking a different approach to technology and inventing their own proprietary coordinate systems. But ultimately, systems such as Plus Codes, What3Words, and Map Code fail for many of the same reasons the current default address alternative, latitude/longitude, fails.

THE WORLD IS FLAT

As a function of its inception as a navigation aid for military ships, missiles and aircraft during long-range navigation around the round ball we call planet Earth, the default coordinate display for most GPS units is latitude/longitude. Unfortunately, this means that since the day when GPS units became available to the public, manufacturers have been unwittingly training the public to think of a global navigation system (latitude/longitude) as the backup for the “very local” street address system. Yet, within the coordinate setting feature of GPS units manufactured for more than a decade, there are a variety of available coordinate display settings to include USNG and MGRS. In other words, just like when an individual buying a car decides between different manufacturers, a GPS user can decide between different coordinate systems for display on a GPS unit.

One key reason why the military uses latitude/ longitude for global navigation and MGRS for local operations is because as the portion of the globe being navigated shrinks from continental to local, it effectively becomes flat. Consequently, and in keeping with the emergency response community mantra of “all disasters are local”, FEMA and others in the emergency response world are following the military example by now using USNG to describe local location. The advantages of “USNG flat” versus “latitude/longitude round” are many, some of which include:

• U.S. National Grid is an always-ready response grid which uses the concept of uniformly shaped squares. Lines of longitude/latitude create irregularly shaped trapezoids which change in size depending on distance from the equator.

• There is only one version of USNG. Unbeknownst to many, there are multiple versions of latitude/ longitude and confusion about which one is being used has sent responders to the wrong location.

• With as few as eight digits, a USNG coordinate can describe a location with 33’ accuracy within approximately a 124-mile square area. That same level of accuracy with latitude/longitude would require at least 13 characters and digits.

• When USNG/MGRS was created by the armed forces, the design standard was it had to be teachable to individuals with an 8th grade education within 15 minutes. Latitude/longitude requires specialized training and is fraught with issues to the degree that “navigators” are normally employed to ensure its safe use in life and death navigation situations.

TWO EXAMPLES FOR THE CGA 811 COMMUNITY TO CONSIDER

USNG is also being employed in ways which indirectly support emergency responders. Two examples which may be of interest to the CGA 811 community are:

• In Texas, the San Antonio district of the Department of Transportation uses USNG as the inventory control number for its geodetic control stations. Through this approach, TxDOT has eliminated the need to create an arbitrary inventory numbering system since location and the inventory number are one and the same.

• USNG Emergency Location Markers (ELM), a program which originated in northern Minnesota to facilitate rescue of lost hikers in remote areas, can now be found on trails in nine states. Rather than using some arbitrary local system to mark locations, the markers show an 8-digit USNG coordinate that works with GPS and is duplicated off-trail by a free app which has the look and feel of the ELM (www.usngapp.org).

Taken together, these approaches hold potential for how underground infrastructure locations could be inventoried and marked in a nationally standardized way to facilitate emergency reporting and response.

Despite a clear trend toward increasing adoption of USNG as the emergency response language of location, progress has been slow. Although not unexpected given it always takes time to change perceptions and create buy-in for a new way of doing business, in many areas institutional inertia has been significant. Principal in these have been leaders unwilling to institute change during their time at the helm, Computer Aided Dispatch systems which do not have USNG capability, general lack of geospatial knowledge in the response community, and no national adoption mandate tied to Department of Homeland Security grant programs.

Despite these problems, grassroot efforts continue to push ahead with plenty of opportunity for learning, engagement, and even sponsorship. Some include:

Steve Swazee is Executive Director of SharedGeo. Readers who would like more information may contact the author at sdswazee@sharedgeo.org.

PrevPreviousGas & Oil Transportation: Pipeline Vs Rail
NextGIS Within The Gas And Oil IndustryNext