DAMAGES to Water/Sewer Pipelines are Costly Too! A cut communications line can shut down businesses and 911 service; hitting a high voltage cable can cause serious injury or even a fatality; and when people talk about damages to the buried infrastructure the focus is often on gas and hazardous liquid pipelines for obvious reasons. The serious nature of hitting a water or sewer pipeline, however, does not normally get the same attention. While it may be true that people rarely get hurt as a result of hitting a water/sewer pipeline, there have been fatalities. In 2013, for example, a construction crew working on the Nacimiento Water Project hit a water line, which flooded a 10-footdeep trench that contained a pipe Jacob Gaines (24) and Manuel Villagomez (38) were working in. Both workers were killed. 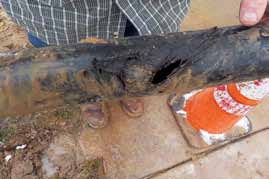 Repair costs when a water/sewer line get hit can be off the charts, and the societal costs can be devastating. A great example, while a bit dated, is one that hits home for me living in Minnesota. On January 4, 2013, a major water main break in downtown Minneapolis flooded streets and cut off water to a substantial swath of the city just before rush hour. Fourteen million gallons of water were released. Repair costs exceeded $325,000 for materials, equipment rental, labor and more. That did not include damages to private property.

OTHER COSTS AND DISRUPTIONS INCLUDED :

• Several streets and a bridge were closed into the following day disrupting traffic flow and access.

• A half-dozen buildings in a three-block area were without water for nearly three days while crews repaired and disinfected the water main.

• Nearby sidewalks and streets were glazed in ice and mud requiring backhoes to scrape them and distribute rock salt to mitigate the ice risk.

• More than 50 vehicles were completely submerged and destroyed in the underground post office parking garage.

We began offering a Water & Sewer Infrastructure Protection Summit at the annual CGA 811 Excavation Safety Conference & Expo to addresses damage prevention topics which impact the water and sewer industry. The Summit is attended by stakeholders from all industries because damage to water/sewer lines impacts everyone. The feedback on the summit has been extremely positive and attendance increases every year. See the article on page 22, Protecting our Water and Sewer Systems, written by two summit panelists Bob Edwards and Mark Bruce who shared some of the questions they were asked and the answers they provided.

Attendance at the CGA 811 Excavation Safety Conference & Expo by water and sewer stakeholders also continues to increase year-over-year as industry professionals realize it is cheaper to prevent damages than to repair them. With the growing concern over potential societal costs when facilities are damaged, the trend of increased participation will likely continue.