Communication is the Key when it comes to Unlocatable Underground Facilities.

UNLOCATABLE UNDERGROUND FACILITIES pose a significant risk to excavators and the communities in which they work. Any facility operator with plastic pipe, concrete, or dielectric cables understands the challenges these assets can pose over time. Tracer wire can break or corrode and “detectable” buried warning tape can have a short lifespan. System maps for acquired assets are often inaccurate or non-existent, further complicating the issue. The industry has recognized the need to mitigate the risk of unlocatable facilities and new technologies have had a significant impact on the number of damages that occur.

Just 10 years ago, over half of all damages with a root cause Locating Practices not Sufficient, were due to unlocatable facilities, making up over 10% of all reported damages. In the 2017 DIRT report, that number is only a fraction of what it once was. Damages attributed to Facility not Found have shrunk considerably thanks to advances in tracer wire, GPR, and acoustic locating. Facility operators have ways to find previously unlocatable facilities, but only if they have the time to do so. Today, most utilities employ contract locators and the average boots-on-the-ground technician doesn’t have these advanced technologies with them in the truck. The locator will notify the operator that they could not find the buried facility and possibly place a flag with notes to alert the excavator. 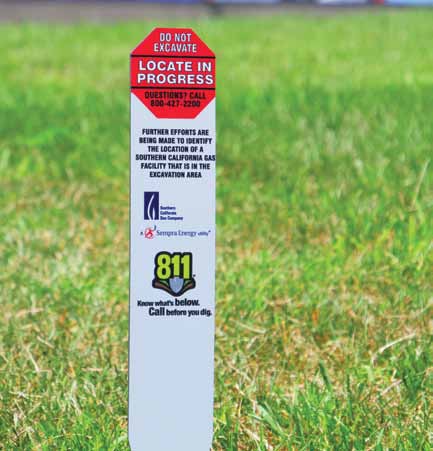 Yellow, white, or even silver flags are in abundance on many jobsites. If an excavator has called in his ticket and waited the appropriate time, there needs to be clear communication on the presence of unlocatable facilities in the area. Expecting a contractor to look for a special flag with handwritten notes is a risk many facility operators are not willing to bear.

Once notified, many gas companies will use internal resources to find unlocatable pipes, but it can take time to deploy personnel and get them to the jobsite. In the interim, the contract locator should install signs or sticks that allow for clearer communication that the ticket has been elevated and the excavator needs to wait for company personnel to arrive. If the locator knows the general location of the pipeline or service, the sticks should be employed at the same interval as locate flags around the suspected location.

Using maps supplied by the facility owner and visual clues at the scene, most locators can narrow down the possible location to a reasonable area. For example, when sent out to locate a four-inch plastic main, a contract locator discovers the tracer wire has either been severed, not grounded, or has corroded to the point it will no longer carry a signal. The operator’s map indicates the pipe should be inside the curb and up onto the easement. Looking along the easement, the locator spots a pipeline marker at the corner in line with the tracer wire access point on the far side of the jobsite. The locator infers the pipeline is four to six feet from the curb following the entire length of the jobsite. Before leaving the location, the locator installs sticks every six to ten feet along the proposed excavation area, three feet from the curb and eight feet from the curb along the entire route.

When the fence contractor arrives at the jobsite, it is clear more work must be done before he can begin augering post holes in the front yard. The contractor finds a phone number on the stick and contacts the local gas company. He is informed that company personnel are on the way and should be arriving in the afternoon, but he can start work in the back yard. When the gas company crew arrives, they use an acoustic locator to find the pipe, vacuum excavation to verify its location, and then work with the fence installer to find a safe place for his post holes. In this scenario, the gas company safely locates the gas main, and the contractor is not forced to delay his work. 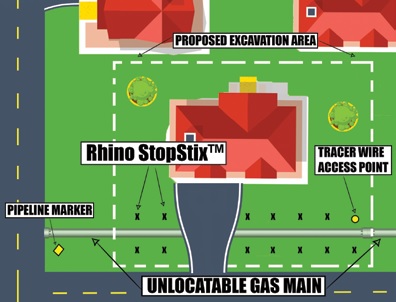 Ever-advancing technology will continue to give us new and better ways to locate previously unlocatable facilities, but without good processes, procedures, and communication we may not get the chance to use it. To ensure excavators get the right message, facility operators need to work with locators to put an effective process in place around unlocatable pipes and cables. Communicate critical information at the jobsite as well as electronically to reduce damages and improve safety for everyone involved.

Chris Thome is a Damage Prevention Consultant for Rhino Marking and Protection Systems, developers of the innovative Stop SticksTM. He can be reached at cthome@RhinoMarkers.com.

PrevPreviousBefore You Dig: The Latest GPR Technology gives Contractors in the Oil and Gas Industry an Edge.
NextTOP RATED OF 2019Next