THIS AUSTRALIAN SUMMER has been the worst for bushfires in living memory. For the State of New South Wales (NSW) alone, by the last week of January, 2,399 homes had been destroyed and 945 damaged. An additional 263 facilities were destroyed. In a testament to the skill and bravery of bushfire volunteers, 14,377 homes and 1,461 facilities were saved. 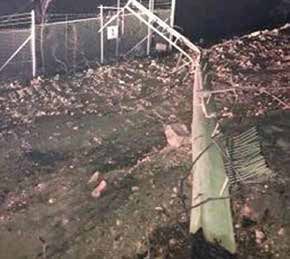 Remains of the ABC FM transmitter near Batemans Bay.

Over five million hectares (about 19,300 square miles) have burned in NSW this summer. This is a record, although more than four million hectares were burned in 1951-1952 and 1974-1975. In the neighbouring State of Victoria, fires have rivalled those on Ash Wednesday, 1983 and Black Friday, 1939.

There is a striking similarity in the findings of Mr. Justice Stretton, the Royal Commissioner on the 1939 disaster and the vision beamed around the world in 2020, “On that day it appeared that the whole state was alight. At midday, in many places, it was dark as night. Men carrying hurricane lamps worked to make safe their families and belongings. Travellers on the highways were trapped by fires or blazing fallen trees and perished.”

Bushfires put out huge amounts of heat. The 1983 Ash Wednesday Bushfires in Victoria were estimated to radiate 60,000 kilowatts of heat energy per meter and emit temperatures of 2000°C. Extreme heat puts enormous strain on exposed utility assets. Mobile phone and radio towers buckle, and exposed cabling is destroyed. And while bushfires are not new, our dependence on utility networks and the services they provide is greater than ever.

Here are some of the early lessons for utility networks from the Australian bushfires of 2019-2020.

Underground Networks can stand up to Extreme Conditions

The good news is how well underground networks handled the bushfires. Jemena is the largest natural gas supplier in NSW with 25,000 km of mains serving 1.3 million customers. Fire emergencies caused Jemena to temporarily take properties in the Central Coast, Lithgow, Bargo, Bundanoon and Exeter off supply in December.

Transmission networks avoided serious damage due to lessons learned from earlier emergencies. Trees and scrub had been cleared around vulnerable installations such as Trunk Receiving Stations. Jemena crews and the Rural Fire Service acted to protect these sites. 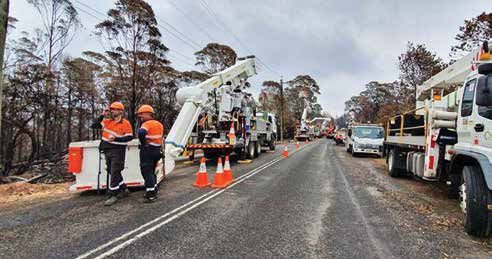 Electricity is the Key Network

When the electricity network goes down, there are major effects on other networks. Almost half of Endeavour Energy’s supply area was burned out. In early January, 35,600 Essential Energy customers were without electricity across southeastern NSW.

Telecommunications towers that survived the fires often lost power. Backup power runs for a limited amount of time. Batteries then run flat or diesel fuel must be replenished, which might not be possible in the fires.

Loss of electricity supply to local fluoridation plants meant residents of Eden, Moruya and Bermagui were asked to boil their water before use. Residents also found that their refrigerators, radios and TVs couldn’t work without power.

A solution will not be easy. Placing electricity cables underground is not financially or technically feasible in many cases. Local backup power plants using solar or diesel might be one answer. Another may be replacing wooden poles with steel and concrete in key sections of the network.

“ANOTHER CONSEQUENCE WAS THAT MANY PEOPLE WERE NOT ABLE TO MAKE ELECTRONIC PURCHASES. FM RADIO TRANSMISSION TOWERS IN EDEN AND BATEMANS BAY FAILED IN THE FIRES. HUNDREDS OF KILOMETRES OF COMMUNICATIONS AND SIGNALS CABLES FOR SYDNEY TRAINS IN THE BLUE MOUNTAINS MUST BE INSPECTED AND OFTEN REPLACED.” 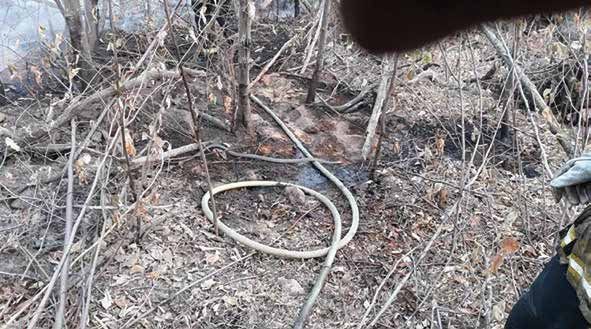 Utility crews had to deal with many dangers when repairing damaged networks. This is an Eastern Brown snake, the second most venomous snake in the world at Milton on the south coast.

Telecommunications towers on the top of hills were at extreme risk from fires. In January, carrier Telstra reported 40 telecommunications towers on the south coast had been damaged in fires. Towers at Mount Wandera and Surf Beach had been destroyed. The Malua Bay tower was badly damaged. As a result, the south coast between Nowra and Moruya lost internet, mobile phone and landline services in early January. Hospitals were off the air.

Another consequence was that many people were not able to make electronic purchases. FM radio transmission towers in Eden and Batemans Bay failed in the fires. Hundreds of kilometres of communications and signals cables for Sydney Trains in the Blue Mountains must be inspected and often replaced.

One bright note was the resilience of the payphone network relying on traditional analogue copper cables. Telstra made payphones available for free and they were a lifeline to many people when the mobile networks went down. As a result, there were long lines for payphones in towns like Ulladulla.

Everyone understands and respects the skill and courage of volunteer firefighters, but utility crews were unsung heroes in the bushfires. Essential Energy reconnected 11,000 people on one day in early January. Endeavour Energy restored power to 12,000 customers including hospitals on New Year’s Day. Crews from carriers Telstra, Optus and NBN were able to restore most mobile towers by mid-January. Continuing fires and occasional flare ups made this work very challenging.

The telecommunications industry is investigating ways to increase network resilience in the future, including network redundancy to support critical services such as banking and EFTPOS in disaster areas. The industry is also investigating use of Wi-Fi and satellite services where mobile networks are down, and temporary facilities such as Cells On Wheels to replace damaged facilities.

The main risk to utility networks in the aftermath of the bushfires is damage caused during repairs. All utilities are concerned with the risk to networks from replacement of fences, particularly on utility easements. Telstra has already warned the public that damage to optical fibre cables can severely affect communications.

The message is getting through. Bega Valley Shire Council reports that referrals through the Dial Before You Dig service increased to 100 per day after the fires.