A Story In The Making

This project began on January 31, 2019 with a call to Indiana 811. A directional drilling company was contracted by AT&T to install a conduit from the south side of 96th Street (Marion Co.) to a point north of 96th Street (Hamilton Co.) on the west side of the road. The locate ticket instructions read: Starting at the intersection locate North for 700 feet on both sides of the road – Right of Way to Right of Way = Boring Where > Under North Gray Road.

SAMCO Locating received the Normal Notice dig ticket on Thursday, January 31, and immediately completed the locate request in the snow. SAMCO locating marks Citizens Energy Group’s Gas, Water and Sewer lines. On Friday, February 1, the Citizens Energy Group System Inspector reviewed the High Profile Critical Main dig ticket and contacted the contractor. The weather had turned bad that week so there was no work starting on this project. On Tuesday, February 19, the weather was a little better and a Remark ticket was called in by the contractor. Again, SAMCO Locating immediately completed the locate request and this time the Citizens Energy Group System Inspector arrived at the site on the start date – February 21. 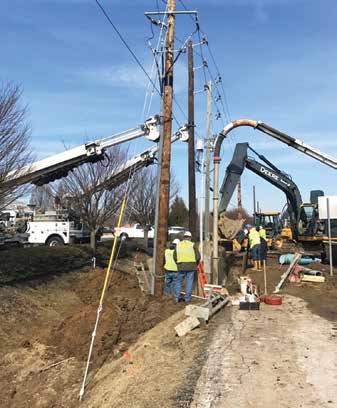 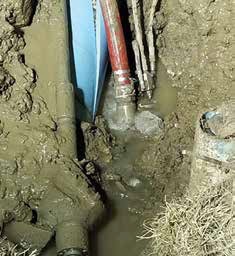 The contractor was at the site conducting test holes on all the utilities his direction bore rig would have to cross. A large vacuum excavator was completing the test holes. The Citizens Energy Group System Inspector observed two separate test holes on a 24-inch PVC water main. The depths of the top of the main were recorded and the holes were backfilled with sand. Up to this point, precautions were taken to avoid damage to all utilities. 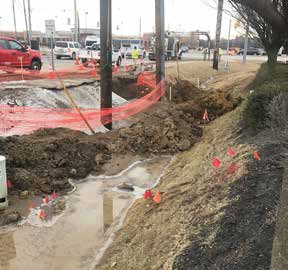 There was no communication or notification received by the Citizens Energy Group Systems Inspector indicating that the directional drilling was going to begin on that day. The Citizens Energy Group Central Control Station reported a nine square mile area was impacted with no water pressure to low water pressure. Dispatch was flooded with phone calls for the next two hours while emergency crews reacted to isolate the shutdown of the damaged water main. Within this nine-mile square grid were restaurants, beauty salons, dentist offices, hotels, schools, etc.

The damaged water main was shut down carefully while Central Control monitored the pressure in the area. The nine-square-mile grid recovered at approximately 2:30 pm. The shut out consisted of one bank, a two-story office building and an apartment complex with 366 units. The repercussion of the damaged main created five additional main breaks and four 20-inch joint leaks that were repaired within the ensuing four days. 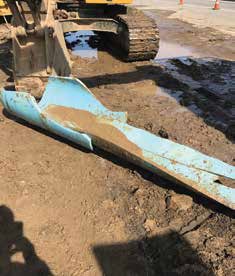 There were several fiber conduits marked near the water pipe along with one power line. Two large vacuum excavators were assisting the big excavator track hoe to expose the cables at $200 each per hour for a total cost of $7,320. Once the cables were safely supported and the cables and conduits were uncovered, the digging began.

While the repair crew was excavating, another crew was rolling out 1,200 feet of three-inch potable water hose to connect a subdivision hydrant outside the shut out to the apartment complex. Within 30 minutes, the temporary connection was completed and charged. The eight-inch valve connected to the 24-inch damaged main that was suppling water to the apartment complex and office building was closed. The 1,200 foot temporary water supply was now keeping 366 apartment units and a two-story office building in service. (Note: The City of Carmel fire department was notified that no hydrant within the apartment complex could be used to fight a fire due to insufficient pressure.)

During the first six hours of excavation it was determined the extent of the damaged pipe was going to require replacing the whole 20 feet of pipe. The 24-inch pipe was 11’, 4” deep. Six 12’ x 8’ shoring plates were set in the excavation with four hydraulic jacks per set of plates. The extended hydraulic jacks were rented from United Rentals at a cost of $1,300.

NATE strongly supports the range of UAS-related initiatives advanced by the FAA to enhance air safety, particularly the registration requirements.

Two rented tri-axle dump trucks were required to assist with hauling spoil from the dig site at a cost of $3,552. A light plant was set up for the evening and by the next morning the excavation was 26 feet long and eight feet wide. There was a two-inch tap located on the damaged pipe to replace and then connect to the new 20-foot section of pipe. Cost of the materials and fittings was $2,580. Two 20-inch mechanical joint sleeves were installed to connect the new section of pipe and trace wire was reconnected. The backfill material consisted of 100 yards of flowable fill, which required 10 concrete trucks at a cost of $8,000.

Tuesday, February 26, at 4:30 pm, the repair was complete, excavation was backfilled and water was turned back on. Labor cost totaled $18,660. Due to the length of the water main shut out, precautionary boiled water was administered. Before the temporary water connection was removed from the apartment complex, extensive testing of the water took place. A subcontractor was notified to clean the jobsite and complete the rest of the restoration, which included an 80’ x 30’ dirt restore and an 80’ x 6’ bicycle and walking asphalt path, at a cost of $5,183. The total cost of this damage approached $100,000.

During the investigation, it was determined that the 24-inch pvc water main was marked properly by SAMCO Locating Company. Two test holes were evident, one 30 feet to the north of the damage and one approximately 77 feet southwest of the damage. There was no test hole at the exact location of the damaged pipe. A test hole should always be executed at the point where the directional drill rod crosses a buried utility. A proper test hole should be open exposing the utility pipe, conduit, cable, etc., and the observer operating the receiver of the directional bore head can watch the bore rod safely travel past the buried utility. Always expose all four sides of any buried utility in a test hole and do not backfill a test hole until you have completed the directional bore project. This particular 24-inch main was changing depth from one test site to the next due to a bend rolled upward and the damage occurred 40 feet north of the bend. Lesson learned: all utilities can change depth quickly so DO NOT directional bore blind!

Robert Edwards is Water Operation Supervisor, Planning and Inspection with Citizens Energy Group. He can be reached at REdwards@citizensenergygroup.com.

PrevPreviousHydro- And Air-Powered Vacuum Excavation
NextRules To Dig By, Including Best Practices For Safe ExcavationNext